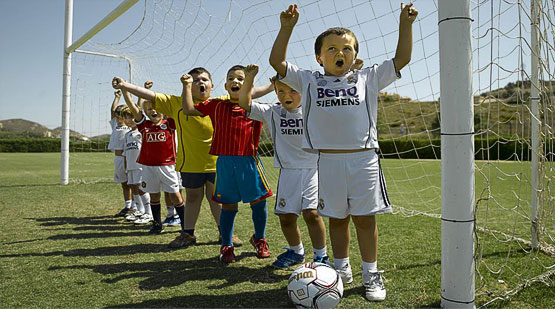 Renowned as one of the best football training destinations in Europe, La Manga Club Football Centre has welcomed some of the world’s greatest teams.

La Manga Club’s football facilities include eight international standard pitches, one five a side pitch and an impressive spectator stand for over 800 fans.

Under 18’s that love football can take advantage of La Manga Club’s Football Academy.  Courses are available for ages 3 to 16 and further advanced courses run for 13 to 18 year olds with UEFA qualified coaching staff catering for any age and skill level.  As well as basic fitness and technique work, the week-long La Manga Club football academies include mini World Cup tournaments and Champions League games.

All La Manga Club Football Academy Coaches are FA/UEFA qualified and have played or coached at professional club level. Players attending the academy for the full week will receive a football to take home. Players attending the academy will also receive a discount on the entry fee into the Mini World Cup tournaments organised by the La Manga Club Football Academy coaches.

There is also the Chelsea FC Foundation Soccer School that players can attend and on completion of the course they will receive a Certificate & Medal along with a Chelsea FC & La Manga Club football kit.

Private one to one sessions covering all playing positions can be arranged via the Tennis Club Reception (one session is 60 mins).

Click the button below (or right click and save) to view the La Manga Junior Academy Rates 2020 as a PDF file.

We are currently awaiting the Junior Academy Rates for 2021. These will be released shortly.

To view the information you will need PDF reading software installed, such as the free Adobe Acrobat Reader.

Energetic youngsters can take part in 2 different academies in the same week with our sport packages and receive a 20% discount. This applies to tennis, football & rugby only.

*Please note that times are provided as a guide; actual times may vary depending on the time of year; please always re-confirm with Tennis Reception.

Rentals by No. Bedrooms